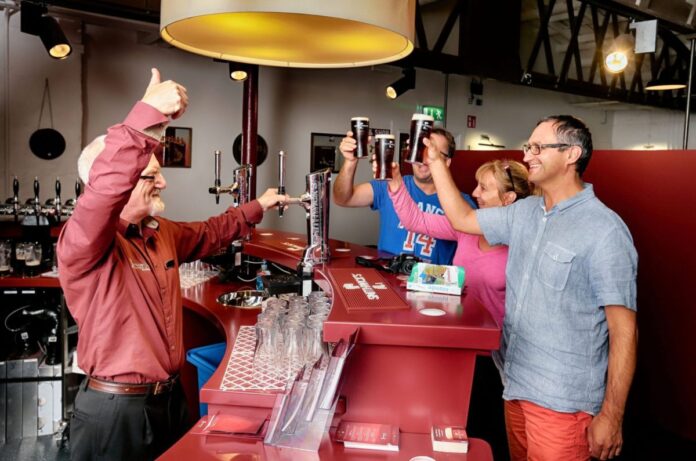 What was once the Great Southern & Western Railway Line between Ireland’s oldest city Waterford and the seaside hub of Dungarvan, is now a fantastic amenity for walkers and cyclists alike, the Waterford Greenway . At 46km in length, it is Ireland’s longest Greenway. This reimagining of a railway line unused for 50 years features as some of the most stunning natural scenery in the south-east, as well as encompassing the ancient and industrial along the way. Joining the picturesque dots of villages such as Kilmeaden, Kilmacthomas and Mount Cosgrove, the Greenway includes 11 bridges, 3 magnificent viaducts and a fairly spooky but perfectly safe tunnel. The route between Waterford and Dungarvan was travelled by railway passengers as far back as 1878 and today you too can make the journey along the Copper Coast, through the Comeraghs and on to the Viking capital of Ireland. Along the way, meet authentic and genuine Deise men and women famed for their hospitality and pride in their surroundings of beautiful Co. Waterford.

Waterford Viking Triangle is Waterford’s Cultural and Heritage quarter, characterised by narrow streets, atmospheric public spaces and an array of cultural & heritage attractions. It is so called because of the 1000-year-old Viking walls which once surrounded it. Perhaps the most famous building in the triangle is Reginald’s Tower (which contains the Viking Museum) but the triangle is also the site of the Medieval Museum and the Bishop’s Palace Museum, collectively known as Waterford Museum of Treasures. Discover Georgian Christ Church Cathedral on the site of the Viking church where the great Anglo-Norman knight Strongbow famously married the Irish princess Aoife. And if you’d like to step in to the present, in the  House of Waterford Crystal you can see beautiful crystal being made: treasures to speak of the city’s heritage in years to come.

Since its foundation in 1974, Kilkenny Arts Festival has gathered many of the world’s finest musicians, performers, writers and artists in Ireland’s medieval city each August.  For ten days, the city’s historic churches, castle, courtyards, townhouses and gardens offer a magical setting for unique collaborations and intimate encounters between audiences and artists.Classical music has been at the core of the programme, featuring globally acclaimed artists such as Victoria de los Angeles, Alfred Brendel and Joshua Bell among many others.  Poetry has also featured prominently since the early years in the 1970s, when Seamus Heaney acted as literary curator and brought some of the world’s finest poets to Kilkenny, including former US Poet Laureate Billy Collins, Kate Tempest and Robert Pinsky.

Discover the Irish draft that took over 300 years to perfect and the history of Smithwick’s ale in Kilkenny, a city steeped in brewing tradition.The Smithwick’s experience is an old Victorian brewing building in the heart of Kilkenny city and is just a five-minute walk from Kilkenny Castle and placed in the middle of Kilkenny’s Medieval Mile. All visitors are fully guided by a local and knowledgeable host who will accompany visitors through the experience, which covers four chapters. You will also get the opportunity to sample the ruby red ale by the fireside.

Castlemartyr Resort- The ultimate in luxury

Discover the magnificence of Waterford Crystal