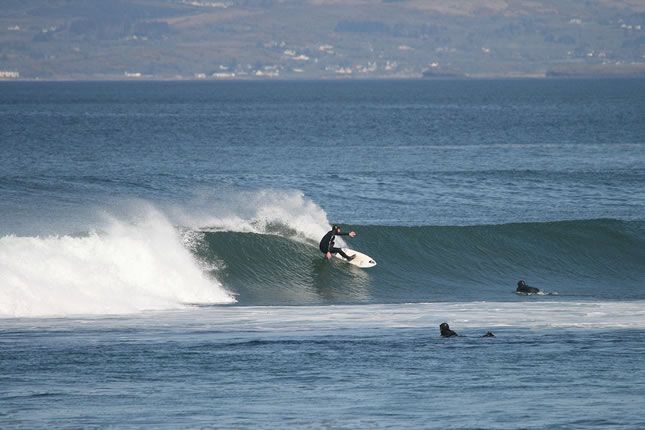 As a kid growing up watching Gidget, I dreamed of surfing—of coming into my own riding waves in sunny California or the blue waters of Hawaii. Never in a million years would I have thought my quest to surf would lead me to Bundoran, a small town on the west coast of Ireland. I say never because Ireland—which evoke rough waters underneath towering cliffs and gray skies— was the last place in Europe I would associate with surfing.

Yet all along the west coast of Ireland, the waves are pumping and luring thrill-seekers from around the world for big-wave surfing in the cold waters. It might seem counterintuitive to people who associate surfing with palm trees and white sands, but the waves battering these coasts are some of the most sought after in the world. Even better, a journey along the coast for adrenaline jolts at secret surf spots doubles as a tour of Ireland’s historic architecture, rolling hills, and gorgeous coastal villages.

I moved to Bundoran from surf-obsessed LA to learn how to surf in 2015. I didn’t know what to expect: Surfers in California are known for being extremely territorial, which can be extremely intimidating for newcomers and novices. But in Ireland I found a welcoming, kind, and open environment for locals and visitors alike, surrounded by Irish hospitality and a real sense of community that embraced outsiders as their own.

I never really mastered surfing as planned—I spent too much time ogling the lads in the pub, but when I did hit the water, I was the talk of the town. And something else unexpected happened when I left sunny California for the Irish coast: I fell in love with Bundoran and the people I met along the rugged Wild Atlantic Way.

The Irish Coast is dotted with these accommodating, dreamy coastal villages where you can immerse yourself in the unique local surf culture even if you never sport a wetsuit. Whether you’re visiting in the big-wave season between September and February or the bustling summer months, these four Irish towns will challenge your idea of what a surf town truly is through an unforgettable Irish coast road trip.

Easkey is a picturesque seaside village where the Easkey River ends, home to the ancient O’Dowd’s Castle and now famous for world-class surf and magical rural landscape. This dreamy village has been attracting surfers since the ‘70s due to the reef breaks and challenging barrels that can be surfed all year round. After hosting the 1979 Pro/Am Surfing World Championships, Easkey was cemented as an international surf destination. Although the waves are for more advanced surfers, the less experience can take a lesson or two at the beach. Or just post up at McGowan’s Pub, where traditional trad music provides a soundtrack to locals sharing surf stories as the Guinness flows freely.

While you’re there : Stop by the ultra-cozy Pudding Row, a popular café in the heart of the village known for its locally sourced food, homemade pastries, and artisan bread.

Located on the Liscannor Bay in County Clare, Lahinch is one of Ireland’s top surfing spots for beginners and experienced surfers alike thanks to its constant waves and range of breaks. The colorful streets are scattered with surf shops, welcoming cafes like Dodi , and spirited pubs and restaurants teeming with post-surf energy. The famous O’Looney surf pub is an absolute must in the summer months: Located on the promenade, it offers up stellar Atlantic sunset views along the surf on the promenade.

If you’re feeling extra adventurous—or maybe just voyeuristic—journey a short drive from town to the famous Aileen’s Wave near the iconic Cliffs of Moher. With its mammoth waves, it’s one of the world’s scariest big-wave spots. Only the best of the best dare to surf, but if that’s not you, it’s still a thrill to watch.

While you’re there: Trade in your surfboard for some hiking boots as you explore the Burren’s Way. Walk along the quiet country roads on this scenic route from Lahinch to Doolin, with a beautiful coastal view of the Cliffs of Moher serving as your reward for your four-hour hike.

Known as the Surf Capital of Ireland, idyllic Bundoran attracts surfers from all over the world to ride the waves and reef and beach breaks such as the Peak and Tullan Strand. An essential stop in Ireland’s historic and stunning County Donegal, Bundoran gets rowdy in the summer thanks to Sea Sessions, a music/surf/skate festival that takes place at the end of June. Over 5,000 people invade this small town of 2,000 for a three-day party with over 50 acts performing across three stages over the weekend (there’s a surf competition too, obviously).

When the waves are flat, discover this enchanting town with a row of pubs like The Chasin’ Bull for some live music or get a snack to go from the hip café Foam. Cruise around the Rougey Cliff Walk to check out the waves and surfers while visiting the wishing chair and fairy bridge along the Wild Atlantic Way for a little extra enchantment.

While you’re there:  Take a dip in the West End Pool, an outdoor swimming pool along the West End cliff walk. This hidden gem—like an Irish cousin to Australia’s famous Icebergs Pool at Bondi Beach—is a great place to get away from the bustle and relish in a little downtime with a good book if you’re not in the mood to swim.

Enniscrone is a small seaside town in County Sligo that serves as an ideal destination for beginners thanks to its gentle breaks. The public beach itself is sandier than its Irish brethren, dotted with dunes and highlighted by the Valley of Diamonds, which looks like a volcano rising from the beach grass. The more laid-back, rustic vibe has made the area popular among campers, but there’s still plenty to do. Take a few lessons or get some surf advice from one of the surf schools like North West Surf School or 7th Wave Surf School , then grab a coffee from Après Tea, an après-ski’ inspired kiosk on the beach. They even offer warm blankets and comfy chairs to keep you toasty while you watch the waves roll in.

While you’re there : Heal your weary bones after a long day of surfing with the therapeutic benefits of Kilcullen’s Seaweed Baths. Enjoy this unique experience at this 100-year-old establishment and leave feeling rejuvenated and ready for another day of surf.

Kilkenny- Get out and about in this marble city

Castlemartyr Resort in Cork sold for €20m to owners of Sheen...