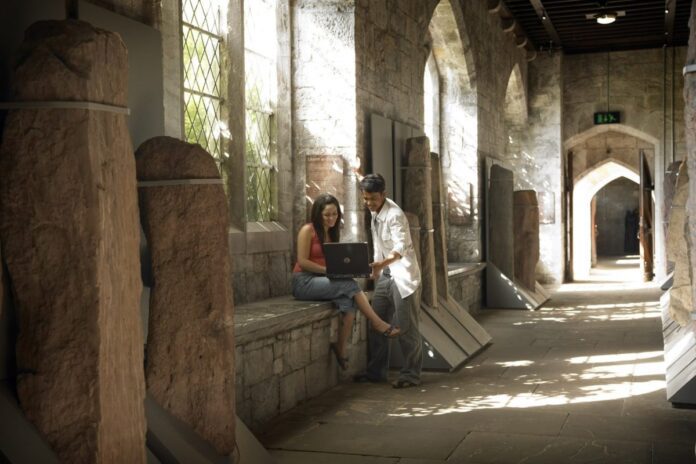 Dotted around Ireland’s Ancient East, and in some rare cases, in the westernmost parts of Britain where ancient Irish raiders had invaded and set up communities, are the Ogham Stones – standing stones which are marked along their edges with mysterious sequences of notches and slashes.

These markings, called ‘feda,’ are the ogham alphabet, said to have been given to the ancient Irish by Ogmios, the god of art, creativity and writing. Another story claims that it was the first alphabet developed after the fall of the Tower of Babel, and was brought to Ireland by a Scythian king who headed west after that biblical calamity. In reality, ogham was most likely a simple cypher based on the Latin alphabet, which would have been familiar to Irish merchants in the 1st century AD.

Each succession of characters is based on groups of different types of feda, beginning with one rightward slash for “B”, two for “L”, three for “V” or “F”, four for “S” and five for “N”. This has led to an alternate name for the ogham alphabet: the bethluisven, from the sounds of the first five letters. Other marks are leftward slashes, notches, and slashes which span from right to left. Some stones also have more complicated characters which represent dipthongs like “ae” or “oa” but it’s thought that these fedas were added long after the rest of the alphabet had been developed.

Ogham gives us our earliest glimpse of the Irish language (see page —), with the language of the very oldest inscriptions classified as Primitive Irish. The vast majority of what’s written on the ogham stones is little more than the names of leaders or landowners, and it’s likely they were a form of ancient signpost, letting travelers, invaders and guests know whose land they were on.

Some of the best examples are to be seen in the Stone Corridor at University College Cork, and others can be seen at St Declan’s Cathedral in Ardmore, County Waterford, where you’ll also see one of the country’s best examples of a round tower and some exceptional early Christian stone carvings. In some cases, ogham stones were later incorporated into churches, and some even survived with a new lease of life as lintels or doorposts in ancient buildings.

BOX: Fanciful writers in the Middle Ages came up with imaginary uses for ogham among the ancient Irish, including a method of signaling in battle by spelling out, with your fingers, ogham messages on one’s arm (lámhogham) or nose (srónogham)…a sort of mythical version of ancient text messaging!

BOX: Nearly all ogham inscriptions lack a feda for the letter “P” because the “p” sound had disappeared from the Primitive Irish language spoken by the ancient Celtic people who carved them.

Staycation in Co Armagh- Things to see & Do

Castlemartyr Resort- The ultimate in luxury