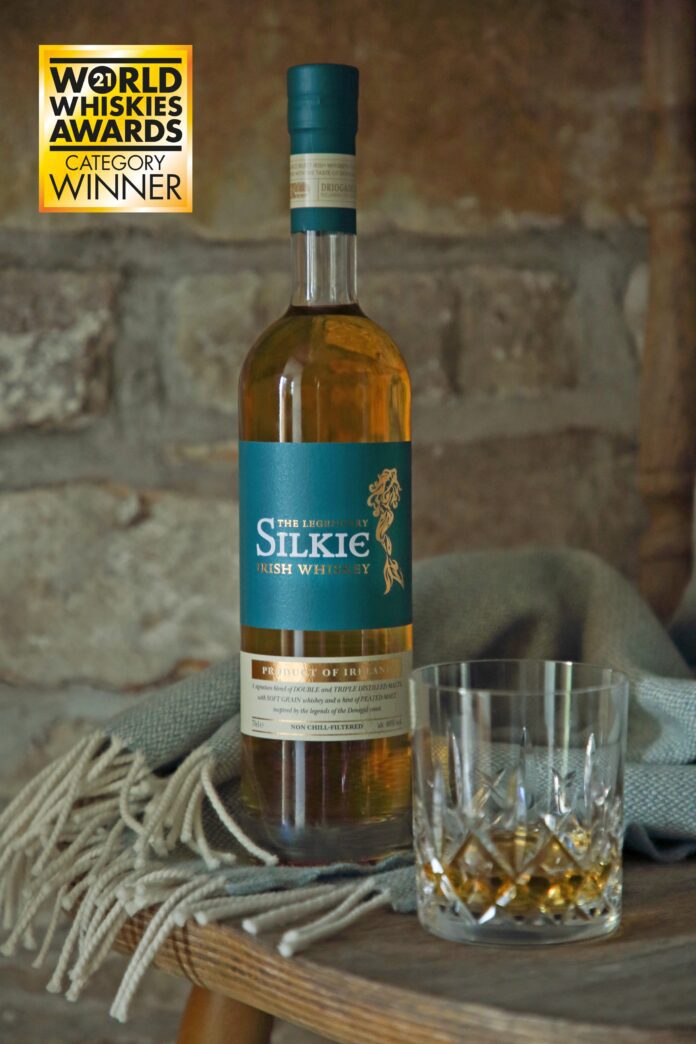 The team at Sliabh Liag Distillers is celebrating after winning gold and silver medals at the World Whiskies Awards. The Legendary Silkie Irish Whiskey won a gold medal and was named overall winner of the blended whiskey (non-age statement category) and their Legendary Dark Silkie was awarded a silver medal, adding two new accolades to a growing list for The Silkie Collection.

The World Whiskies Awards celebrates the world’s best whiskies. The global awards select the very best in all the internationally recognised styles, and award and promote the world’s finest whiskies to consumers and trade across the globe.

James Doherty, one of the directors of Sliabh Liag Distillers, says it is an honour to be recognised at an international level: “It’s fantastic to be acknowledged among some of the best whiskies in the world. We love seeking out and sourcing amazing whiskeys to blend in our style and we know that our Legendary Silkie and Dark Silkie brands taste great and have a really distinctive story, with a strong connection to Donegal, so we’re delighted to be sharing that with whiskey lovers around the world.”

“As relentless as this past year has been, we’ve also had a lot of other reasons to celebrate” said James. “We turned the sod on the Ardara Distillery and began shipping our whiskeys to America, and the response has been exceptional. As lovely as it is to be acknowledged with awards, for us, the real seal of approval is in re-orders, and thankfully, states across the US and territories throughout Europe and Asia are keeping us busy with their re-orders. We’re shipping another container of Silkie and Dark Silkie to America this week and our Donegal whiskeys are already available in 24 states across the USA from California to New York and from Florida to Oregon.”

The team at Sliabh Liag Distillers is particularly pleased with the reception to The Silkies and to the revival of peated styles of Irish whiskey. Dark Silkie and the limited edition Red Silkie, have been heralded as a triumph in the Irish whiskey community: “We’re getting a great reaction to our blend of double distilled single malt and triple distilled peated single malt with soft grain whiskey” says James. “And we are having fun capturing the sweet smoky flavours of the whiskeys produced in Donegal in years gone by. Peated Irish Whiskey was almost lost during a period of distillery closures and industrialisation in the early 20th century, but is the style that rural communities, particularly in Ulster would have produced; our aim is to resurrect this beautiful style of whiskey. Back by popular demand we have a Cask Strength bottling of Dark Silkie coming out imminently, and we’re working on something even darker and peatier in style, which we plan to release later this year” James said.

The Legendary Silkie Irish Whiskey and Dark Silkie are available from all good off-licenses throughout the country and can be purchased online at www.sliabhliagdistillers.com.

“A day in the life of” Olivia Collins, Director Collins Consulting...

Things to see and do in Monaghan