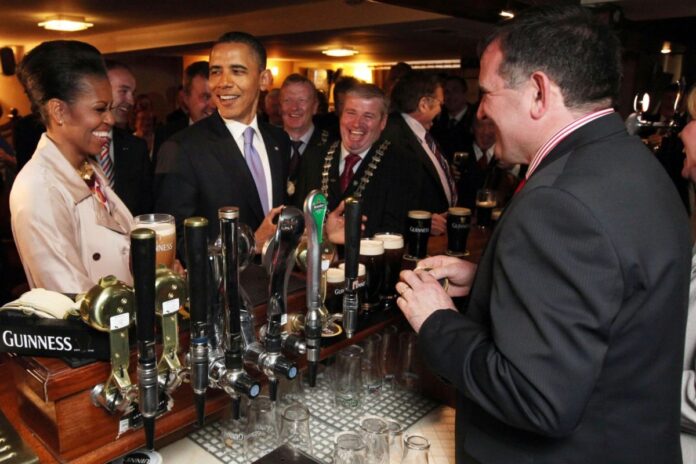 A is for Ardmore. The Round Tower in this Co. Waterford village, where St. Declan established his monastery, is the only monastery on Ireland’s coast.

B is for Brú na Bóinne. This UNESCO World Heritage Site is home to the largest concentration of stone art in Western Europe.

C is for Cinema. Over 25 different movies and TV series have been shot around the Palladian mansion and estate at Powerscourt, Co. Wicklow – including Black Beauty, The Count of Monte Cristo, Ella Enchanted and King Arthur.

D is for Dolmen. Brownshill Portal Tomb in Co. Carlow is Europe’s largest dolmen. Itscapstone weighs in at an impressive 150 tonnes!

F is for Flashy. According to Lonely Planet, Hook Lighthouse is the flashiest in the world! It’s the oldest intact operational lighthouse, too.

G is for Guinness. Arthur Guinness was born in Celbridge and ran his first brewery in Leixlip before trying his luck in Dublin. He is buried in Oughterard, Co. Kildare.

H is for Halloween. ‘Samhain’ was originally a Celtic festival celebrated by pagans at the Hill of Ward (Tlachtga), Co. Meath, as far back as 200 AD.

I is for Inn. Kytler’s Inn in Killkenny is named after Dame Alice Kytler, born in 1280 and reputed to be Ireland’s last witch. Kytler was widowed four times and accused of poisoning all of her husbands… though she escaped capture.

J is for JFK. President John F. Kennedy’s family hailed from Dunbrody, Co. Wexford. The John F. Kennedy Trust was founded in 1988 to commemorate his legacy.

K is for Killruddery House, Co. Wicklow. The ancestral home to the Earls of Meath has been a popular location for many well-known movies and TV mini-series, including My Left Foot, Far & Away, Angela’s Ashes, The Tudors and Camelot.

L is for Lonely Planet. The influential travel brand not only voted Ireland one of its hottest countries to visit in 2015, but ranked the Smithwicks Experience in Kilkenny as one of the year’s hottest attractions!

M is for Muiredach’s Cross. The tallest (and arguably most beautiful) remaining high cross in Ireland can be visited at Monasterboice, Co. Louth.

N is for Newgrange. This 5,000-year-old passage tomb was engineered 500 years before the Egyptian pyramids, and 1,000 years prior to Stonehenge!

O is for Old-school. The High Kings of Ireland ruled from the Hill of Tara in Co. Meath. Meath continues to be known as the Royal County today.

P is for President of the United States of America. President Barack Obama’s great –great-great grandfather was the son of a shoemaker from Moneygall, Co. Offaly. He left Ireland for America in 1850.

Q is for Quaker. Ballitore, Co. Kildare is the only planned and permanent Quaker Settlement in Ireland.

R is for Rumbled! According to legend, the devil once called at Loftus Hall in Co. Wexford. His identity was uncovered during a game of cards, at which point he is said to have absconded… by flying through the ceiling.

S is for Santa Claus. The original St. Nicholas is said to be buried at Jerpoint Park, Co. Kilkenny… but sssh, don’t tell the small people!

T is for Titanic. Cobh, Co. Cork, was the last port of call for the ill-fated White Star liner. 123 people boarded the ship at Ireland’s most southerly point… although seven lucky souls disembarked. The ship struck an iceberg and sank on April 15, 1912.

U is for Mount Usher. The Wicklow gardens were voted Best to Visit in Ireland by BBC Gardeners’ World Magazine. Wicklow is known as Ireland’s Garden County.

V is for Volcano. Croghan Hill, Co. Offaly is the root of an ancient volcano.

W is for Waterford, Ireland’s oldest city. It was founded by Vikings between 856 and 914, making the city over 1,000 years old.

X is for X-Factor. When mythical hero Fionn Mac Cumhaill tasted the Salmon of Knowledge, caught in the River Boyne, he was instantly filled with wisdom.

Y is for Yield – something Sir William Wallace emphatically did not do during the Wars of Scotish Independence. Braveheart, which told the story, was filmed in part at Trim Castle, Co. Meath – Ireland’s largest Anglo-Norman castle.

Z is for… a Zillion things to do in Ireland’s Ancient East!