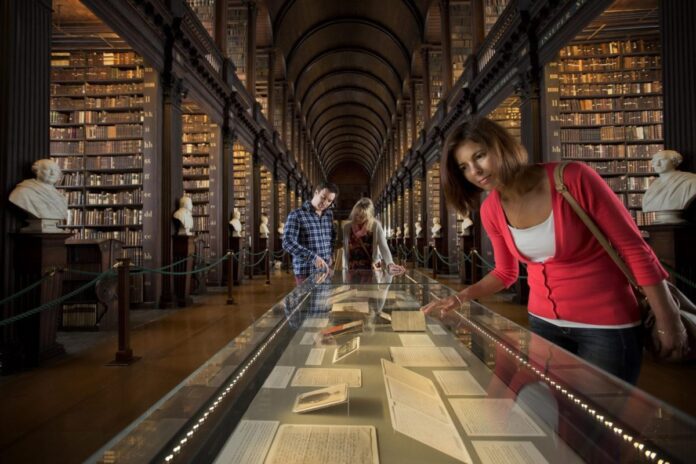 The Guinness Storehouse is Ireland’s number one International Visitor Attraction stretches across seven floors shaped around a giant pint, which, if filled would contain 14.3 million pints of Guinness. As you make your way through the impressive storehouse, discover the age-old art of brewing that makes Guinness so distinctive; visit the Tasting rooms, a multisensory tasting experience designed to help you appreciate the distinctive taste of the iconic stout. You can learn how to pour the perfect pint in the Guinness Academy or enjoy the best in Irish cuisine at the Guinness & Food Experience on level five. The highlight for many visitors is the Gravity Bar, symbolically the ‘Head of the Pint”, where visitors can enjoy  panoramic views of Dublin city – views that are all the better with a complimentary pint in hand.

The Book Of Kells Exhibition

The Book of Kells is the centrepiece of an exhibition which attracts over 500,000 visitors to Trinity College in Dublin City each year. It is Ireland’s greatest cultural treasure and the world’s most famous medieval manuscript. Written around the year 800 AD, the Book of Kells contains a richly decorated copy of the four gospels in a Latin text. Originally a single volume, it was rebound in four volumes in 1953 for conservation reasons. On display in Trinity since the 19th century, two volumes are normally on display, one opened at a major decorated page, the other at a text opening. It is accompanied by two pocket gospels.

Dublin’s Kilmainham Gaol held some of the most famous political and military leaders in Irish history such as Robert Emmet, Charles Stewart Parnell, the 1916 Rising leaders and Eamon de Valera. If for no other reason, Kilmainham Gaol in Dublin would be remarkable for being the biggest unoccupied gaol in these islands. As such, it gives the visitor a dramatic and realistic insight into what is was like to have been confined in one of these forbidding bastions of punishment and correction between 1796 when it opened and 1924 when it closed. It offers a panoramic insight into some of the most profound, disturbing and inspirational themes of modern Irish history. Leaders of the rebellions of 1798, 1803, 1848, 1867 and 1916 were detained here.

A trip to Croke Park  wouldn’t be complete without experiencing the treasured GAA Museum. Get ready to immerse yourself in the unique story of Gaelic games from ancient times to the present day.  This museum is like no other sporting museum you’ll ever visit. It not only celebrates Ireland’s national games, it also vividly brings to life how the GAA has contributed to our cultural, social and sporting heritage.  Featured exhibitions include the original Sam Maguire and Liam MacCarthy Cups, the Hall of Fame, and a whole floor dedicated to the games as they are today. When you’re done exploring, get a taste of the action in the popular Interactive Games Zone, where you can test your hurling and Gaelic football skills!

Longford, waiting to be discovered

Things to see and do in Carlow

Things to do in West Cork