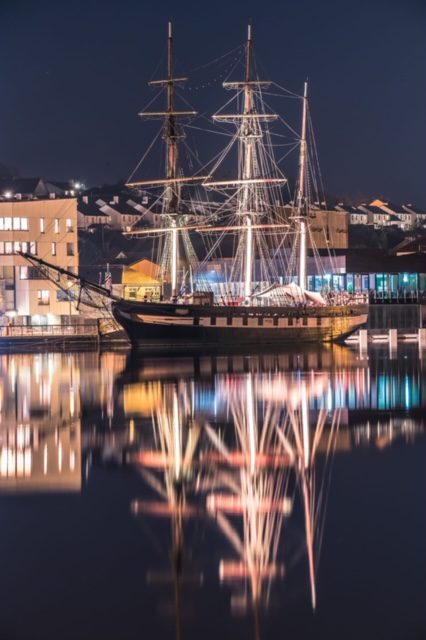 February 11th 2001 was a red-letter day in the life of The JFK Trust. It saw the long-awaited and much-anticipated arrival of the Dunbrody Famine Ship at its permanent home alongside the purpose-built visitor centre on The Quay in New Ross. Her construction involved many local craftsmen and women and was supported by the local community, individuals and companies together with significant funding from the local and central Government agencies.

A redevelopment of the visitor centre was completed in 2011. This incorporated the Irish America Hall of Fame and The Savannah Landing Point, both of which were established in collaboration with Irish America Magazine and the Wexford Savannah Axis, building on our international links and reconnecting destination ports from our maritime historic past. 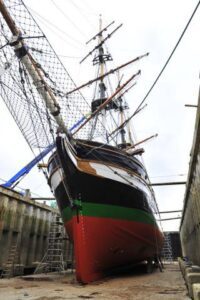 The Dunbrody Famine Ship Experience has established itself as a firm favourite on the coach tour route. It has successfully attracted almost 70,000 visitors each year over the last 20 years with 10,000 making the journey to the Kennedy Homestead annually, resulting in well over a million people being attracted to our town of New Ross and Co Wexford. We feature prominently in Ireland’s Ancient East Marketing campaigns – this new brand has dramatically expanded tourist activity across the east of Ireland. It is the intention of the JFK Trust to remain at the forefront of all marketing innovations for the southeast region.

marked the occasion in June of that year. The Trust was established to tackle the

and expertise. We are a not for profit organization with charitable status.

We currently employ 19 rising to 48 across a normal summer season. We had a turnover €1.7milion in 2019 with over €800,000 in wages going directly into the local economy. We also support local business and suppliers and services where possible so the bulk of our

turnover goes back into the economy of New Ross and its environs. 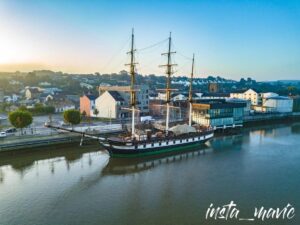 the vessel and upgrade her from a sailing vessel to an exhibition ship, a very different proposition from her original purpose.

The traditional lifespan of these wooden ships was approx. 35 years and as the Dunbrody Ship ages she requires constant and necessary maintenance and repairs.

We are grateful to Wexford County Council for their support and expertise in facilitating this necessary work.

KEEPING NEW ROSS IN THE LIMELIGHT

Presidents, Taoisigh and Government Ministers have all visited The Dunbrody along with many of the International Diplomatic Corps. We have been a catalyst for investment and development locally. The Historic JFK 50 Celebrations in 2013, the opening of our magnificent Boardwalk, the lighting of the iconic Emigrant Flame and the opening of the Kennedy Homestead Visitor Centre have all added to the profile of New Ross and further aided by the exposure garnered from the visits of numerous members of the famed Kennedy family.

The Dunbrody has featured in many documentaries and films along with numerous music videos. Our profile is viewed by many other towns and counties as a model of how a community came together to fight the recession and build a tourism product of international renown.

The project has always been dependent on people. We fully appreciate the many volunteer directors who have served the project well over the years from inception to the current day, the many gifted people who built the vessel, the dedicated and talented staff who have worked so hard at building the reputation of the project to a level that sees the Dunbrody Famine Ship Experience recognized now as a world-class visitor experience and the leadership of Sean Reidy as former CEO and Current CEO Sean Connick.

Over the years we have developed close and vital working relationships with Wexford County Council, New Ross Municipal Council and Failte Ireland in the creation of a hub from which related community and business activities will radiate, to grow and develop the tourism offering throughout County Wexford and the Southeast thus appealing to a national and international market. We look forward to contributing to and supporting ambitious projects that are currently in the pipeline. The project has also been supported by POBAL Dept of Rural & Community Development and many Government Agencies including Wexford Local Development, Wexford Local Enterprise Office Ireland Funds, Coca Cola, Dept of Social Protection, Local Employment Services Network. Community Finance Ireland.

We would also like to thank our many visitors and loyal customers over the last twenty years, everyone who has supported us.

February 25, 2021:  Cork Airport, which was Ireland’s fastest-growing and most punctual Airport coming into the COVID-19 pandemic a year ago, welcomes the news...

Crothúr Murphy is the Owner/Managing Director for Custom Ireland, a DMC based in Dublin that specialises in experiential incentive travel; and Crafted Ireland, its...

Since 2017 Ellie and Carl, known as Tough Soles, have spent 6 months of each year living in a tent and hiking their way...

On the 17th of April 2017, Ellie Berry and Carl Lange handed back their apartment keys and stepped out their Dublin front door for...

50 Things To Do In Doolin On Your Irish Staycation

Donegal Airport- Most scenic airport in the world

Explore the Walled City of Derry