Home Counties Cork This Cork hotel has had their Christmas stolen! A treat that will... 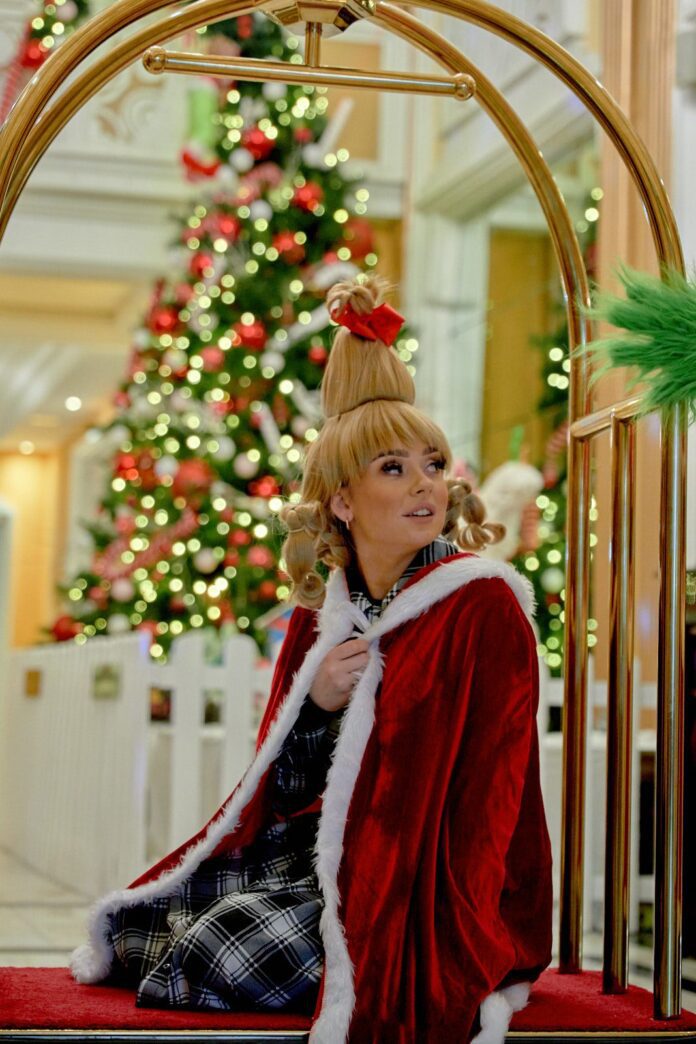 After more than 200 years in business, Cork’s luxury boutique Imperial Hotel was forced to close its doors earlier this week.  The shock announcement came after a sudden takeover by ‘The Grinch’, who has relocated his Whoville village and lair to the luxury South Mall landmark hotel for the Christmas season.

Before reopening his doors to new ‘Who’ residents, The Grinch rebranded the exterior of the hotel as ‘The Imperial Whotel’ in a nod to his provenance.  He also engaged the talents of Whoville’s energetic Cindy Lou and the Imperial family to give the majestic foyer a grinch-like whimsical makeover, which fans of the festive favourite will love.

Sitting centre stage in the lobby is a highly detailed Whoville Christmas Village handcrafted from gingerbread and embellished with detailed icing work by the hotel’s talented pastry chefs.  The installation also features a working train set and looks like something straight out of the Dr Seuss storybook!

You’ll find lots of Grinch green lighting, candy canes, and curving Christmas trees just like in the movie.  There are beautiful baubles, wreaths and lights everywhere echoing the extravagance of Whoville decorating traditions, and you might even spot the Grinch’s sleigh on the ceiling!  And make sure to keep your eyes peeled for the Grinches notes scattered throughout the ‘whotel’! 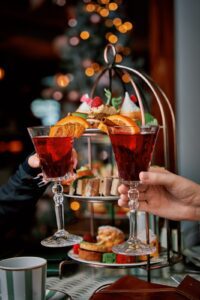 Of course, the Imperial team also had to appeal to the new owners rather sizeable ego so there are other ‘tributes’ including framed portraits donning the walls from the artist John Bell, Grinch movie memorabilia, and a Grinch family tree displaying the ‘Who’s Who of Whoville’- the perfect Instagram spot for any grinches out there!

And you can feast like a Who (who like to feast feast feast) with a specially created Grinch Afterwhoon Tea at Layfette’s, which will make everyone green with envy.  Priced at €39 per ‘Who’, you’ll feast Who-puddings with a Mojito Gateau topped with a heart three sizes too small, a Chocolate and Hazelnut Who-Éclair, a signature Pistachio and raspberry Who-Battenberg, and a Cindy-Lou Lemon Meringue!  And you’ll FEAST on festive who-sandwiches such as chicken & pecan with cranberry, smoked salmon, cream cheese and dill pickled cucumber, turkey, tarragon and smoked almond, and poached egg mayo with glazed ‘who-ham’.  And you’ll drink Whoville Mayors-Spritzers’ (which the Grinch couldn’t stand in the least!).  Then you’ll eat something he liked least of all, a selection of white chocolate and cranberry scones with ‘Who-Jam’ and cream.

You can also treat yourself to a Grinch themed cocktail including the Whoville-Fizz, Who-Tini, Winter Bramble or Grinch Grimlet Gin.

It truly appears as if the Grinch has stolen Christmas at this Cork hotel – albeit in a good way!

Welcoming the new Grinch ownership, General Manager of The Imperial Bastien said, “The Imperial has had a great run for over 200 years, welcoming many famous faces from Michael Collins to Grace Kelly, so we are excited to now work under a big movie star like The Grinch.  We like his way of thinking, that Christmas’s are about experiences and spending time together rather than things – “Maybe Christmas (he thought) doesn’t come from a store.  Maybe Christmas perhaps means a little bit more” – He also shares out green vision which will enable to us to keep our ongoing commitment to sustainable practices throughout the hotel!”

The innovative Whotel is embracing the chance to go Grinch Green for Christmas to celebrate their recent Eco-label Award from Green Hospitality.  It might be steeped in over 200 years of history and tradition, but the Imperial has a thoroughly modern outlook when it comes to the environment.  The Grande Dame of Cork, as the hotel is known, received the prestigious award for introducing an Environmental Action Plan focusing on Energy, Waste & Water Management in their historic building. Their dedicated Imperial Green Team introduced numerous sustainability initiatives over the past year, including a #BecauseWeCare Programme, a Sustainable Christmas Market, a sustainable restaurant ‘Thyme at Seventy-Six on the Mall’, a sustainable cocktail bar ‘Sketch’, which uses 99% Irish products, a sustainable parklet outside the front door, and policies such as green purchasing and environmental waste management.

Make a break for the Imperial with the Grinchmas Getaway package for package price is from €211 per Who (person) sharing, which includes two nights bed and breakfast, a Grinch Afterwhoon tea, and a John Bell print in your room.

“A day in the life of” John Fardy, Presenter of the weekly Film/TV Show on Newstalk Radio ‘Screentime’ & Producer of ‘Down to Business...

A great article first published by Ireland Before You die November 10, 2021 Want to know who has fallen head over heels for our country?...

John Fardy is the Presenter of the weekly Film/TV Show on Newstalk Radio ‘Screentime’. He also produces the highly popular ‘Down to Business with...

Explore Adare Manor from your own home with our series of 3D tours. https://lnkd.in/eehmwQsA Use our new overhead link to click on the map for different...

Women should never inconvenience their colleagues by bringing a baby into work – they’ll...

“A day in the life of ” Ashley Rooney Co Founder...

Why should you choose Clew Bay Bike Hire for your Greenway and...